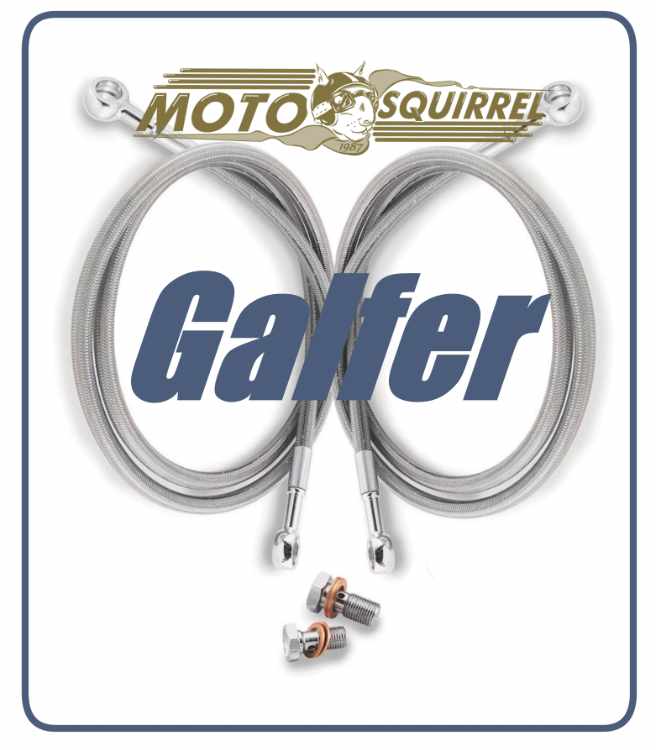 We at Motosquirrel have been preparing a winter “Tell new Tails!” series when it comes to riding stories, reviews and …..wait for it….TIPLITS!- Yes we coined it here first! (Just as we paired photo graphics of bikes in profile view in our “Size Matters” series- Now everyone is doing it!

It never pays to be trendsetters!

Back to the story at hand: New brake lines (Hydraulic hoses).

So many Cool People talk and review their motorcycle(s) along with products in a way that makes the reader/viewer feel that they have ALWAYS been cool! Very few speak of their humble beginnings which are full of mistakes, misunderstandings and absolute accidents!

We are not mechanical engineers here at Motosquirrel and we do not pretend to be. We encourage all new and long time riders to research, qualify, get advisement and purchase equipment for your bike through highly trained professionals.

With that said, when we started riding no one specifically or expressly forewarned of how important brake lines, their state of function and the usage of higher quality metal braided outer lined units are!

When learning to ride within the greater Seattle area (One of the most hilly and steep cities in North America- Yep even worse than S.F.!) it didn’t occur to us how much of a role engine braking would be required as well as how essential it’s usage needed to be learned! As a matter of fact- we barely new what Engine Braking was… Wait a minute (You newbs are saying)! You said that you Squirrels were going to talk about brake lines! We are! Read further.

Like so many towns and cities in the Northwest, Seattle has only one major artery running through it’s middle, namely, I-5 (Evil). The area has grown twice the size in ten years (Thanks Bezos, Bill and on and on) so all the state roads are hyper busy. Which leaves the minor avenues packed full of cars. Add in Communitarian special bike lanes, devoted bus lanes, plus idiots on small electric bikes taking up whole lanes….well- it is a recipe for disaster. Or, perhaps it is a finely tuned and orchestrated plan to promote a need for more tunnels which will birth an entirely new tax boondoggle on the people! Ermm….we digress! Sorry!

Back to hills and traffic! While residing in a city such as this it is mainly impossible to learn to ride in massively chaotic bumper to bumper traffic. A new rider has to get up at 5:30 am (Timing the commuter traffic perfectly) as well as Leave The Bubble and find roads to practice on!

In our neighborhood, in order to orchestrate any ESCAPE, it requires that a rider or driver take on extreme grades that feel like climbing a wall! Add into these hills too many parked cars on either side, construction everywhere, frantic traffic, deliveries (Thanks Amazon!), and commuters following their GPS’s through small streets…well this is hell on earth for a new rider!

What happened: While practicing on Motosquirrels very first sport bike through the peaks and valleys of a very posh neighborhood overlooking Lake Washington, the front brakes gave out while careening down an extreme incline that would eventually end and abut at a T cross street at it’s bottom!

Having ridden this bike for about an hour through the hills and NOT knowing (through ignorance- as well as a lack of video tutorials covering motorcycles on hills) that a motorcycle is NOT a bicycle- this Squirrel used the moto brakes like a bicycle’s brake system. Over and over while descending quickly, and sometimes abruptly, I overused the brake set without having any mind to utilize the engine! Through ignorance and an excitement to learn I overlooked what a combustion engine and geared motor can do!

Little did I know (Always wanted to use that cliché) that all the while those old rotting brake lines were heating up, become more flexible and unable to maintain pressure to the lower cylinder! Also when I bought my bike used, these very brake lines had been completely overlooked by my Squirrel self! I was told the bike was like new and the brake pads were barely used……(But the bike had been sitting in someones garage for years!). I don’t blame the dealer, BUT we at Motorsquirrel feel that there should always be special considerations for new riders!

Back to careening down a super steep four hundred yard hill only to face a brick wall at it’s end! Luckily, this Squirrel has had umpteen years of experience riding bicycles and I believe that in this case it truly saved me! Reaching the lower third of this hill which abutted a cross street (And most likely after soiling myself!), out of habit from mountain bike riding, I reacted by jumping up onto the foot pegs (Like pedals of a bike) and haphazardly slammed the ball of my foot onto the rear right brake foot lever of the motorcycle. I began to slant and skid my way along the curbside and road seam that caught my bike for about ten yards eventually hoping up to the grass that ran along side the brick wall. I skidded, hopped a curb, slid some grass and slammed my motor off – ALL without being a professional Supermoto Driver! It scared the Sh*f out of me!

Being Stooopid (Wanted to write that too!) after this accident, I did not know entirely whether the bike was safe to ride further down the major hill to the Squirrelpad. “Were the lines leaking?”- I asked my squirrelself. “How about the levers themselves?” I didn’t know anything at that time, but one thing was for sure- it was time to replace everything if I could. This meant new brake lines (I was determined to find higher quality), new hydraulic fluid and a test of all the levers and seals.

The only problem was that my bike was now stuck at the top of the hill, in a posh neighborhood overlooking Lake Washington. Being under a mile away from home, it felt silly towing my bike from there! Plus spending more money on stupid! I decided to leave my not-so-priceless toy among the toy buyers homes up on the hill!

I immediately researched all things brake lines, fluid, replacement, testing and being a D.I.Y. Squirrel that is not afraid of wrenching….committed to the idea that I would remove and replace the system out on the street in the Uber rich reserve.

After purchasing and receiving Galfer (Based on great reviews, match for my bike, and price) brand brake lines from Revzilla (The very next day!) and all the materials I needed to replace my old worn-out brake hoses- I made haste to rectify my mechanical breakdown with a mobile fix-it Takedown! (Note: the materials required to replace my old brake lines consisted mainly of: Brake line fluid as per manufacturer suggestion, New braided brake lines, Brake cleaner, plus ensuring that the Galfer’s came with proper copper crush washers plus banjo bolts etc.)

Armed with tools, my mobile mechanical pit crew vehicle (Econo-Car Hatch Back!), newly gained knowledge on how to bleed brakes and regain/install new lines, I arrived at my bike in millionaire world and determined to brush off the scoffs and stares!

Your Squirrel worked quickly but with great care. I also filmed it! Squirrels film themselves all the time don’t ya know!

The Galfer’s fit perfectly! And once tightened down and brakes were tested- I could feel the difference immediately! There was/is a night and day difference in brake pressure, sensitivity, actuation/return and quality feel to these brakes now. Combine this system to a very light (325 lb.) motorcycle and suddenly you feel that this new monster could race on a track. NOT kidding! Go Galfer! I will NEVER go back to crappy brakes!

Addendum: A year later I would find myself on this very same bike with this updated state of brakeage (Yep said it). And thank the big man that I was. While I was about to traverse across a busy commercial street in a nearby town, an autistic child who was hiding (literally hiding from his family) behind a light pole decided to forgo the crosswalk light and ran full pace into my bikes path. My heart was in my throat! I used these updated brakes with full force and not only stopped, but I stopped straight, within feet of missing the child plus we both lived to talk about it! No joke. If I would have still had older or less quality brake lines fitted onto that bike I am certain that I would not have been able to stop so quickly and efficiently! Period! Update your lines!

Galfer is a huge manufacturer of many varieties in bike parts including brakes, brake and clutch lines as well as pads……check em’ out!