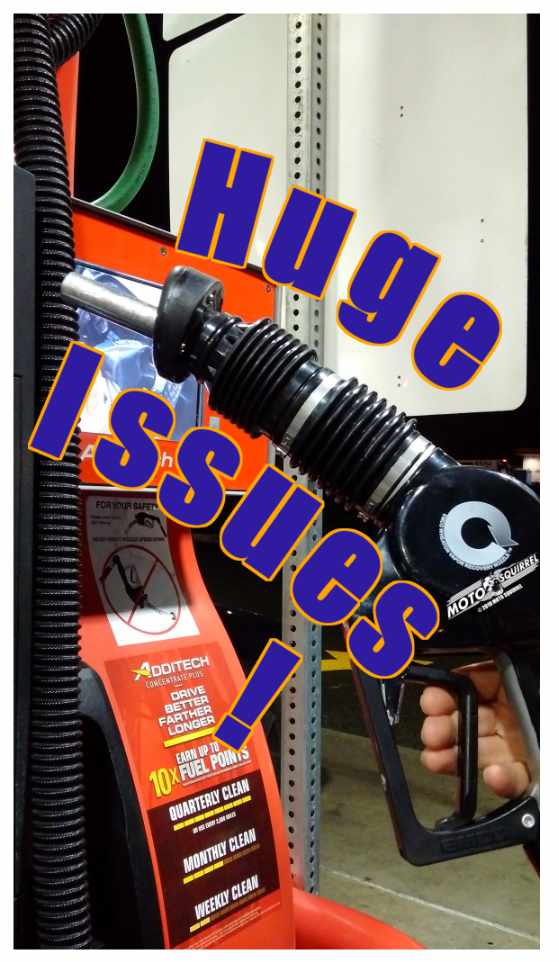 This motorcycle beef has been on the back-burner since this last spring. (Of course- once this article is published, it will fulfill the need and void of various Youtuber’s who lack any original ideas etc….we digress!).

It was this last Spring, in April, when we were trying out a new pair of tires and taking on some new territory with our small two-wheeled Squirrel-Mobile.

Needing gas (We don’t need gas! WE are full of hot-air), rather- the bike needed gas, so we stopped in at a locally owned gas station (Yep, we care about small business….you will too someday!).

What was different was when it was time to get the dam 97 octane to flow out! It wasn’t happening! A bit miffed, your Squirrel wasn’t conquered for long and decided that it was a temporarily screwed up pump and proceeded to pack up, take the bike off it’s stand and relocate it in order to attempt a go at the pump number next to it.

Motosquirrel swiped the card, pressed in all of the required Bleepn’ information, smacked my favorite 97 octane….and…..the same dam thing! No Gas!- What the H*ll?

Feeling stupid (We have a cure for this- A future article is due)….we took a deep breath and went in to ask the Station Attendant what was up or what, perhaps we were doing wrong. Having a minute to spare, he came out and watched as we proceeded to again gas up our motorcycle. 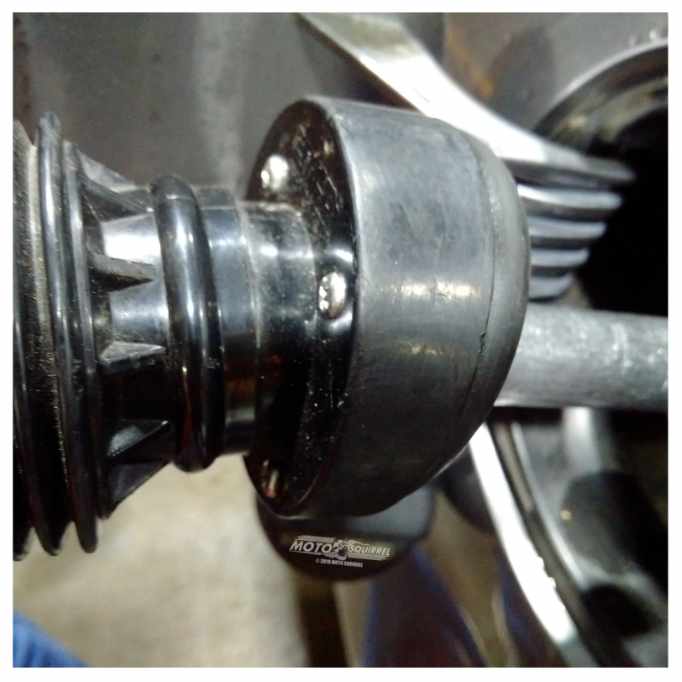 Note: This is a nozzle example filling a car etc.

As he watched he sort-of chuckled and said that we were doing it wrong! He explained (With his heavy accent) that these were the “NEW” pump knozzles that were installed a few months back. He exclaimed, “You see that round part there?”, pointing to this rounded doughnut shaped black part that rested between the long metal tube I was used to and the normal handle mechanism that is covered in rubber. He continued, “You have to push that round part against the edge of your car or gas tank flat- so that it will detect or know that the nozzle is hooked up to your vehicle”. 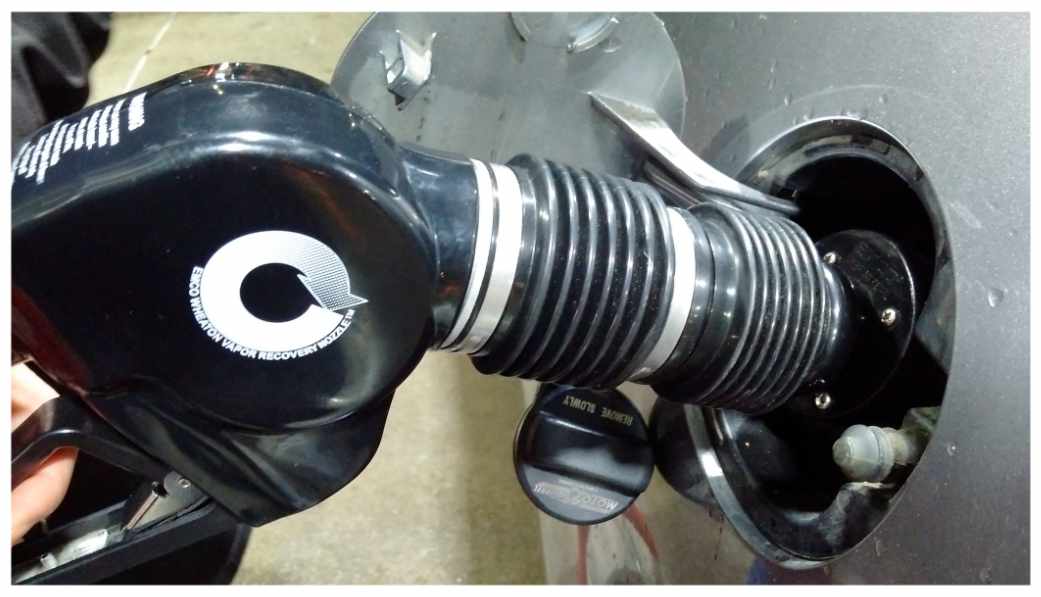 Note: This is a nozzle example filling a car etc.

I thought about it and the original designs that had existed for years and were set up to detect a venturi vacuum difference so that the whole system wouldn’t overflow while you were filling. In THIS instance he was informing myself that the system wanted to know, or needed detection, that it was engaged in order to fill!

I asked him if they had installed all of this newer (Better?) units in all of the super gas stations and retailers as well. He noted that they had and the reason why I probably haven’t noticed is that most cars and vehicles have a natural boundary or flat surface which will readily be a place to shove or engage the units. We both thought it likely that most users wouldn’t notice the difference- if the unit(s) didn’t begin filling into a cager-mobile, most consumers would probably just push it or wiggle it until it would work. 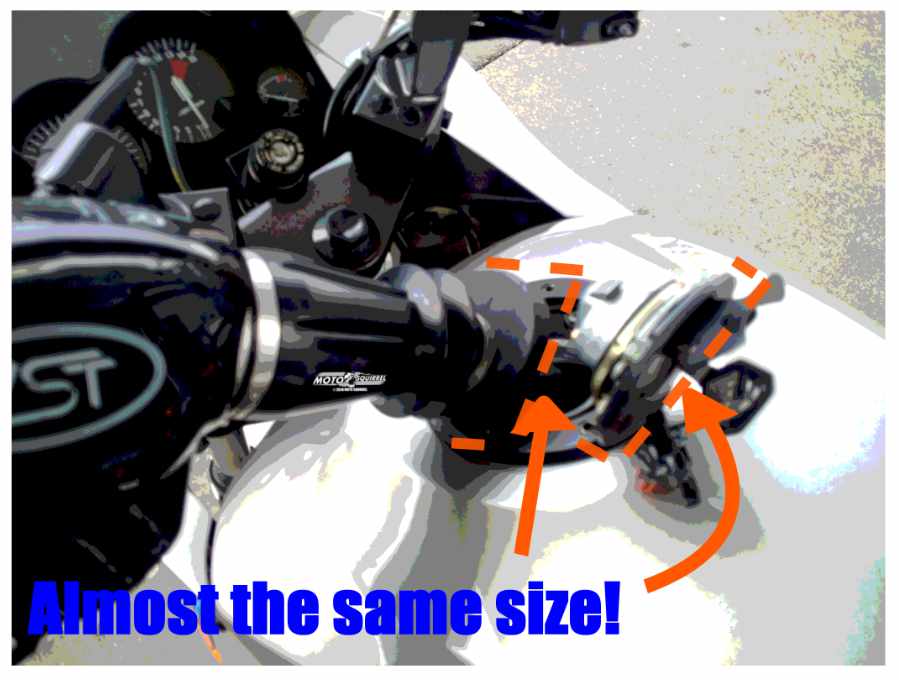 But NOW we are talking bikes! Motorcycles have a limited depth to work with as well as a myriad of design difference which could prevent a newer nozzle of this type from engaging/sealing/kissing their gas tanks. Add in all the difference tank-bag attachments and you have a recipe for certain stupidtood!

How would I get this unit to seal at the time of my filling and this new information. Instinctively, I grabbed that doughnut with both hands and pulled it toward the handle base, acting like a suction action would. As the dip-tube insertion part hung partly inside the tank, I was able to awkwardly fill my tank!

But this sucked! We motorcyclists need to be able to interrupt our filling to check our tanks, top it off proper PLUS be able to see the top of the tank as we fill. This giant sucking doughnut from hell makes this very hard. Especially to fill with one hand!

Needless to say, I got gas all over the place! Who or what was this mini-bit of inventive stoopid invented for!? NOT Motorcyclists!