Kawasaki Teases and Pleases!
(Rebirth of the KLR from the ashes?)
Note to Kawi: WE SAW THE BEAK SHADOW! 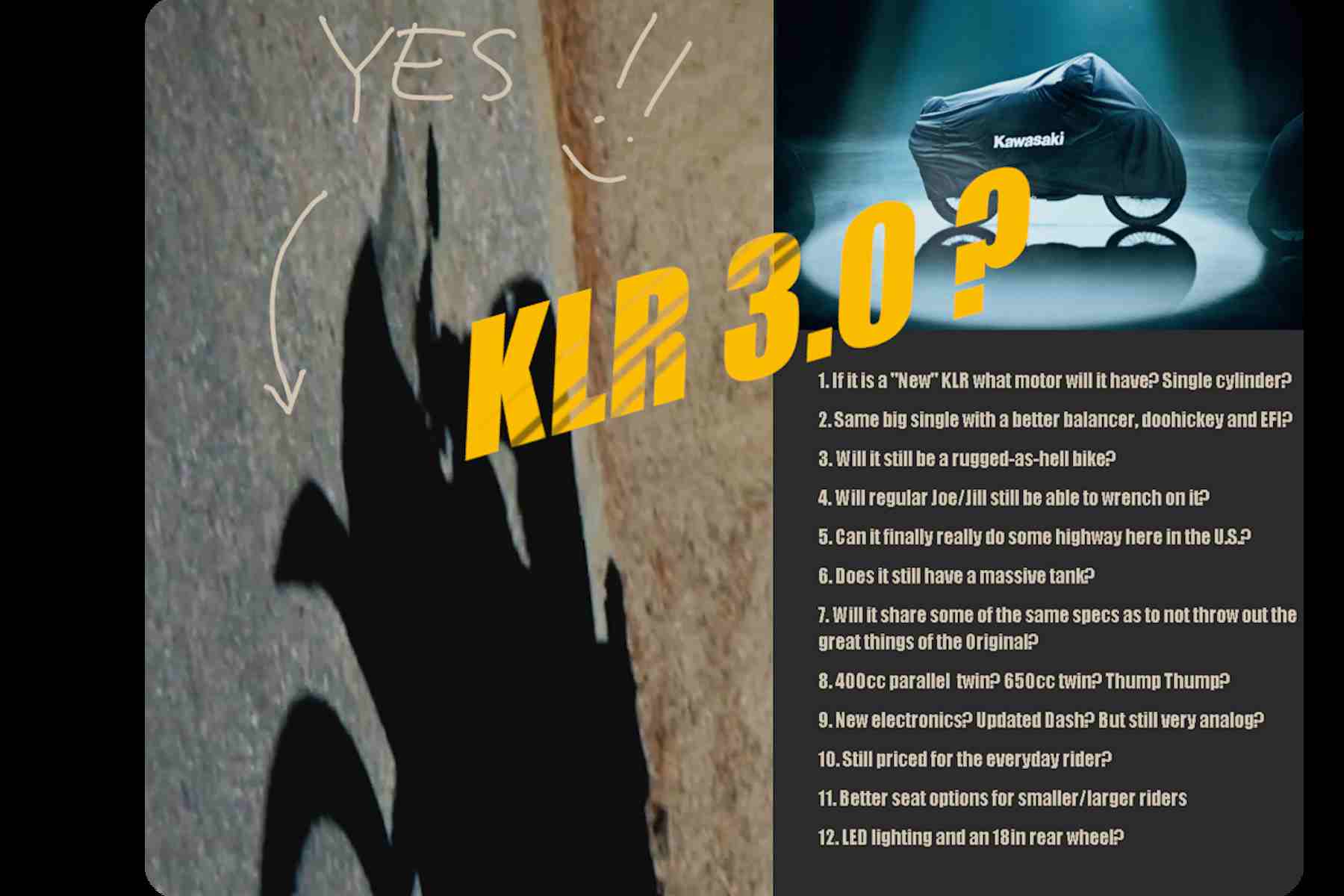 We SAW it! Kawasaki! That is definitely Dual-Sport! (Original Images property of Kawasaki Heavy Industries)

In the modern world, many companies, especially sports conglomorates have forgotten how to “Tease” an audience! Too many spoilers presented as trailers for upcoming films have made many a potential movie goer actually SKIP seeing the very film(s) initially teased altogether!

Not Kawasaki. Nope not this time. Maybe we here at Motosquirrel have been locked-down, away or shut-in for too long…..but- we don’t remember Kawasaki hinting at some of the new bikes they are about to present to us on Nov. 23 at any previous bike show etc. we visited.

Let’s cut to the chase. We here at Moto “SQ” don’t care to weigh in on the millions of guesses as to what these models may or may not be. There are thousands of empty-ish vloggers on the tube who are thirsty for subject matter by which to fill bits and also satisfy subscriber attentions ad nauseum. (We will know the bikes when they unveil them…….SEE! we told you so)

We, on the other hand, want to be ….wait for it….surprised!

Yep! – In this age of non-anonymity, instant communication, gratification, information, meta-marketing, likes and dislikes and on and on….. We just want to be surprised!

“Why?”, You (Our favorite Squirrel-Friends) may ask?

Because there is one thing no one can take away from Kawasaki whether you are a fan-boy or girl-fan. It is that Kawi makes exciting bikes. And, if at times they don’t, they quite often create a “Sleeper” hit of a bike that becomes so popular that no so-called Moto Journalist could have predicted it! Enter the KLR 650 or the Versys 650 etc.

Exciting motorcycles in their beginnings- not so much. But these bikes have become iconic work horses through time and space. In the case of the KLR- it is such a great, time withstanding brute that it was used by many military units throughout the world. Can anyone say KLR Diesel?

As a matter of fact, here in the U.S.A., so many people love the Good’Ol KLR 650 so much that they practically think of it as an “Merc’an” (Say with terrible stereotyping accent- Sorry to our great South!) product. As in “It’s so good it OUGHT to be American”- Yep wrap your head around that one!

So………..Teasers are meant to spark anticipation, excitement and emotions plus foment a million questions!

Our questions (Not answers to what this new group of Kawi models could be) to the possibility of a KLR re-birth are thus:

1. If it is a “New” KLR what motor will it have? Single cylinder?
2. Same big single with a better balancer, doohickey and EFI?
3. Will it still be a rugged-as-hell bike?
4. Will regular Joe/Jill still be able to wrench on it?
5. Can it finally really do some highway here in the U.S.?
6. Does it still have a massive tank?
7. Will it share some of the same specs as to not throw out the great things of the Original?
8. 400cc parallel twin? 650cc twin? Thump Thump?
9. New electronics? Updated Dash? But still very analog?
10. Still priced for the everyday rider?
11. Better seat options for smaller/larger riders
12. LED lighting and an 18in rear wheel?

Thanks to Kawasaki for making a real “Teaser” thirty second vid that has got the industry, motorcyclists and enthusiasts the world over excited!

Let’s get out of our houses, do the dangerous fun things and take some chances like Kawi does once in while!